Award winning classical guitarist makes her mark in the South

Marina Alexandra is a classical guitar player originally from the Ukraine. The virtuoso has made a lasting impression in the musical landscape of the South through her relentless work ethic in teaching music and her entrepreneurship.

Alexandra’ s musical aspirations began at the tender age of six, when she was accepted to the government sponsored School of Music for Talented Children in Kharkov, Ukraine. She began playing the guitar, the most popular instrument during the time, to accompany her singing and because her mother wanted her to.

Alexandra eventually earned her bachelor’s degree at the Kharkov State College of Music. In 1996, she moved to South Carolina with her husband and pursued her master’s degree at the University of South Carolina. Today, she keeps a busy schedule by teaching private guitar lessons, instructing students at Columbia College as an adjunct professor, and running the Southern Guitar Festival and Competition, which she founded.

Musicians such as Leo Brower and Juliam Bream have inspired her throughout her journey. Even though she values technique, she admits the music world has changed from the time she started.

“These days, I think the audience is looking for a whole package. They look for charisma in the artist’s playing, not just the right notes at the right time,” she said.

Alexandra’s talent has been noticed by many publications. Classical Guitar Magazine said, “She is of the elite class of musicians where technical assuredness is just taken for granted, and the listener hears and listens to the music not the technique required to produce it.”

Over the course of her career, Alexandra has received many awards in competitions. Some include the Music Teachers National Association State and Regional Competitions and semifinalist in the sixth annual Edwin H. and Leigh W. Schadt National String Competition. She has performed for National Public Radio and the Piccolo Spoleto Festival, just to name a few. Her most recent album, A Moment of Magic, is a repertoire of Russian composer Nikita Koshkin’s works. Alexandra has dabbled in baroque and modern music guitar arrangements.

From the Free Times newspaper: 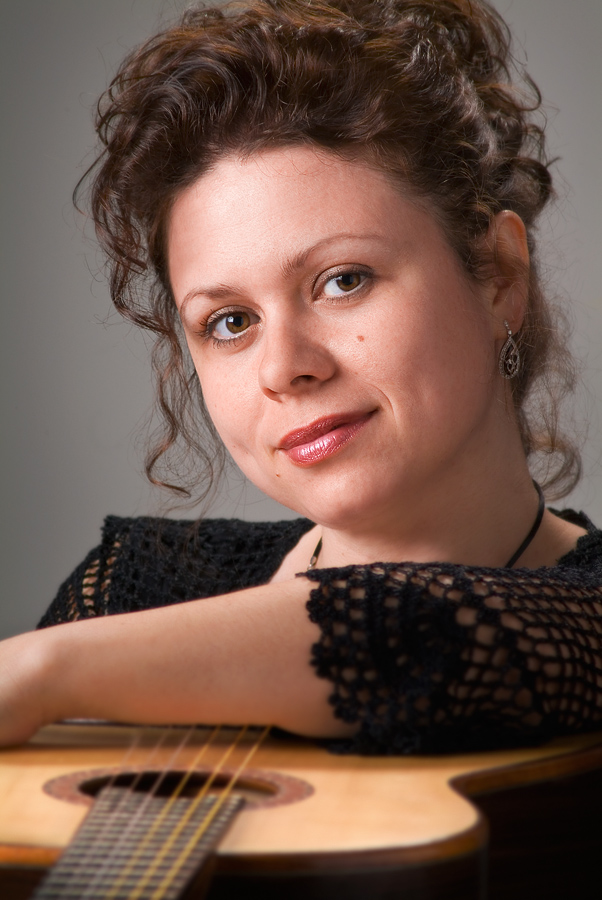 Marina Alexandra’s near-lifelong interest in playing the guitar covers a lot of ground.Born in Ukraine, she started learning the instrument at the age of 6, mostly at the insistence of her mother. “I was singing non-stop, near the mirror with a hairbrush in my hands, imitating a microphone,” she says. Her mother “thought it would be nice if I could learn to accompany myself on a guitar, learn a chord or two.” Her mother’s preference was for “bard music,” which Alexandra explains is a kind of Soviet folk music popular in the 1960s. “It was a genre developed by Soviet intellectuals,” she says, referring “to singer-songwriters who wrote songs outside the Soviet establishment, similarly to folk singers of the American folk music revival.”But Alexandra had no intention of becoming Ukraine’s answer to Joan Baez. Instead, her preference leaned toward the kind of classical sounds that will be featured this weekend at the fourth annual Southern Guitar Festival and Competition in Columbia, which she founded. The festival, which runs June 5-7, is equally divided between entertainment and education. It opens this Friday with a concert at 7:30 p.m. at the Tapp’s Art Center. Featured will be Finnish guitarist Otto Tolonen, along with Alexandra, Craig Butterfield (bass), Chris Teves (guitar), Matthew Slotkin (guitar), Teri Forscher-Milter (flute) and Brett Floyd (guitar). Tickets are $20 for adults and $15 for students and children under 15.The educational part follows on Saturday and Sunday at IT-oLogy. IT-oLogy will host competition round performances, workshops, lectures and master classes given by teachers from around the world. On Saturday evening, the festival returns to the Tapp’s Arts Center with a performance from the New Flamenco Trio at 7:30 p.m. Tickets are $25 for adults and $20 for students and children under 15. The festival ends Sunday afternoon at Tapp’s with performances at 4 p.m. by the three young virtuosos who won last year’s competition: upcoming Brazilian guitarist Andre Machado and an American flute/guitar duo, Galestro-Smith. Tickets are $15.Since emigrating with her family to the United States in 1996, Alexandra has been learning and teaching classical guitar at an academic level. She has served on the faculties of Furman University, University of South Carolina-Aiken, Wingate University and Columbia College. She is also the guitarist in Duo de Vista with flutist Teri Forscher-Milter, and she performs regularly on stages throughout the Southeast.Though Alexandra has dedicated herself to classical music, she did have some flirtations with popular and rock music. “When I was young, my boyfriends would try to influence my taste by playing The Beatles, Metallica and Scorpions,” she says. “But it never kept me entertained for more than a few days … All I can say is that when I hear beautiful classical music, no matter on what instrument it’s played, I stop thinking, moving and breathing.” Despite the fact that the guitar has such a prominent place in popular music, Alexandra bemoans the fact that many still don’t know it in its classical form. “Everybody knows musicians from the pop culture, but so few are familiar with classically trained amazing guitar players who can play anything from jazz to classic,” she says.Hence the need for the Southern Guitar Festival. “Our festival is one of the very few festivals in the USA that is not produced with the common support of the college or the local university,” Alexandra says. “We are very proud of the fact that our event is independently organized, and not associated with any local institutions. This production is supported by guitar lovers and professional musicians throughout South Carolina.” 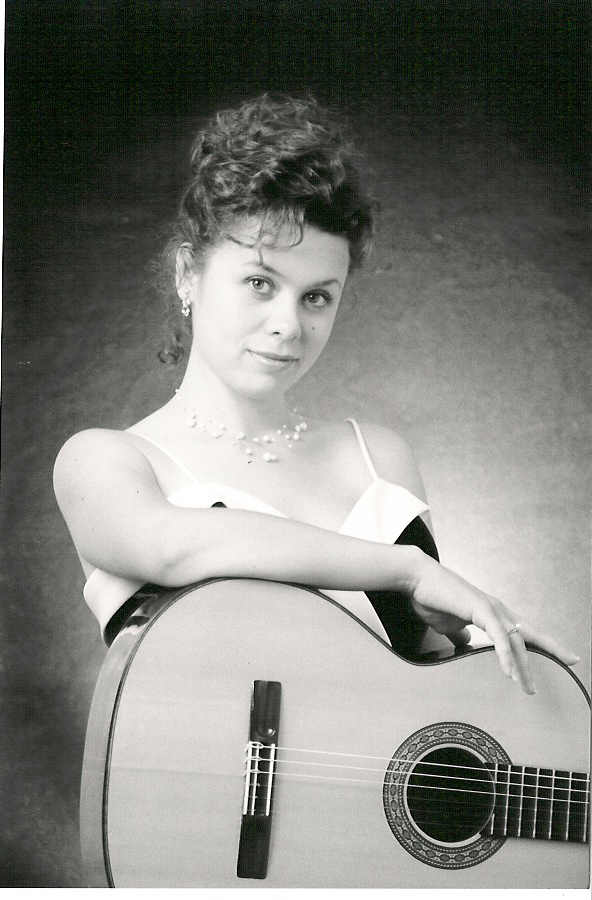 Marina Alexandra was born in the city of Kharkov in the Ukraine. At the age of six, she was accepted at the School for Music for talented children.

She graduated with honors and continued her studies with the highly-respected Vitaly Pertrov at the Kharkov State College of Music. At the age of seventeen, while still completing her bachelor’s degree, she was invited to direct a classical guitar program at the public school in Kharkov. Within a year, Marina received an offer to work as a full-time teacher at The School of Music for Talented Children.

In 1998, Mrs. Alexandra was awarded a scholarship in music and graduate fellowship in guitar to study with Christopher Berg at the University of South Carolina. In 2001, she received her Master of Music degree in Guitar Performance from USC.

Q: You were accepted at the School of Music for talented children at age six. Was that based on your guitar skills?

A: No, but it is very competitive since it is sponsored by the government, and there are limited spots available every year. Exams are designed to check for general music skills such as rhythm, pitch, and tempo. Basically, they were pre-selecting musically inclined children.

Q: What got you interested in the guitar at such an early age?

It was my mother’s idea. She really liked bard music, a type of Russian country music, that was in a way an underground movement cultivated by Soviet intellectuals. She said I would sing non-stop, and she thought it would be nice if I could learn how to accompany myself on a guitar. In addition, guitar is a very popular instrument and has always been a big part of the Russian tradition of singing after a meal and at gatherings.

Q: Do you come from a music family?

A: Not at all, my parents were engineers.

Q: You now have studied in the American universities system and taught in it as well. Tell me the difference in the systems in the Ukraine and the United States.

A: It took me awhile to get adapted to the “gentle style” of American teaching. I came from a culture where everything is expressed in a very direct way. My Ukrainian teachers never hesitated to show true emotions. They could be extremely happy with the results and would give me a big hug and kiss on the cheek, or they wouldn’t even speak to me if they didn’t like my performance. My American teachers were always nice and logical and probably way more reserved in showing their emotions.

When I came to the USA and started teaching, I remember asking my American friends to print out for me a list of “nice “ phrases that I could use to articulate my reply to  my students’ playing. Often, within the first 5 seconds of a student’s playing, I would say in my head: “This sounds pretty bad.” And then I would spend the next five minutes thinking of how to say it nicely. Personally, I think the European system can make a tough player into an excellent musician, but it may destroy a fragile individual. In the American system, everybody has a chance to become good without being pre-selected.

Q: While I am not condoning the government, I have always admired the fact that the Soviet Union always funded the arts and gave opportunities to young people to work early on with good instruction. Tell me about this system and do you wish the US government funded the arts in the same way?

I think that art and music education was one of the few positive things that were happening in the Soviet Union. Most of the kids who wanted to study and had a talent got the opportunity to do so for a relatively small monthly fee (5% of monthly salary). Every student accepted into art school received around 5 hours of training per week. It included 2 hours of the main instrument (in my case guitar), 1 hour of piano (a secondary instrument was required), theory and history. When I came to the USA, I was surprised by the absence of such music schools for kids. There were lots of small music studios that were commercially based and were not focused on well-rounded musical education. What surprised me even more is that most of the parents were not even interested in well-rounded music education. Music lessons were just another activity aligned with soccer practice, karate and other “fun things” to do.

I do wish the American government would sponsor music and art schools, so truly talented kids will have an opportunity to study music, dance, and any type of art regardless of their families’ income.

Q: Do you think there is great discipline in study in your homeland?

Absolutely. The majority of parents are very dedicated to the nourishment of a child’s work ethic. In our families, when children took music lessons, parents understood that 45 min minimum practice daily was a must. Most of the parents wanted to see the results and were ambitious about their kids’ achievements on the instrument. I guess it made them feel that their kid is special. The ability to play a musical instrument or dance well are highly regarded talents in Ukrainian and Russian cultures. It is kind of like an attitude toward sports in the USA. 99% of American parents truly believe in the absolute importance of sport. They are willing to spend hours a week shouting in the fields. But when it comes to practicing an instrument or any kind of art, it is treated as an option.

Q: You now live in Columbia, South Carolina. Have you become a US citizen?

Yes, I did become a US citizen and am truly proud of it. When I went back to the Ukraine a couple of years ago for a visit, I realized that I am much more American than I thought I was. I love so many things about this country, to the point that I became very subjective and willing to argue with my Ukrainian friends about the American ideals.